A basket of delights

Piemonte is a land of vineyards and hills, mountains and lakes and a gourmet's favourite destination in any season, where you can taste over 370 traditional food and beverage products.

Moreover, Torino has brought the famous vermouth aperitivo, chocolate and coffee to such a degree that transcends local specialty status.

The traditional cuisine of Torino and Piemonte, which is one of the most diverse in Italy, attracts many connoisseurs from all over the world, listing 45 starred restaurants.

The culture of good living and the richness of the local food and beverage offer inspired great initiatives. Bra (60 km far from Torino) has been the birthplace of Slow Food, the international association promoting the culture of local food and wine, which has 70,000 members spread across more than 50 countries. While Pollenzo (close to Bra) hosts the Wine Bank and the first University of Gastronomic Sciences.

If it is true that Piemontese cuisine is among the most various and refined in our country, made of rich and articulated menus, it is also true that many of its recipes are peasant-inspired.

Main features of the Piemontese cuisine are:

A place of honor in the Piemontese cuisine is occupied by rice, maybe due to the fact that this is the ​​greatest rice cultivation area in Europe. Probably brought to our continent from India by Alexander the Great, it started to be cultivated here to be coocked and served as main dish in the Middle Age. In Piemonte, the Cistercian monks played a key role in that, working the marshy lands of the Vercelli area and giving the cultivation of rice an incredible boost, thus promoting their consumption throughout the region, thanks to the migratory flows of people employed in agriculture.

Another key element of the Piemontese cuisine has been over time the proximity to France. Due to historical ties with France, from politics to economy and culture (the Piemontese dialect is rich of Gallicisms and sounds pretty similar to the French language), the two cuisines experienced a similar evolution. Over time, several Piemontese chefs studied and refined their culinary tecnique in France, sometimes bringing with them typical Piementese recipes (such as the "Salade Piemontaise", our version of the Russian Salad).

Then, while maintaining its authenticity and connection with local products, Piemontese cuisine benefitted from the influence of France, specially in pastry (with the presence of eleborated small pastry or marron glacés) and dairy products (as a matter of facts, in Piemontese menus cheeses are served at the end of the meal, as it happens in France).

Another connection with the French cuisine can be found in the large variety of sauces used to season meat, vegetables and cheese. Here you are the unmissable ones:

Today, Piemontese cuisine is no longer just the "daughter" of the French one, but it gained its own identity: it is noble, elegant, sober, but robust. Everything has a flavor in Piemonte: above all the woods, the valleys, the mountains. It is a seasonal cuisine, that give its best specially in autumn, when its products show off their precious qualities and their enchanting flavors.

To sum up, the Piemontese cuisine can be considered a true and astonishing melting pot of local products and foreign influences, tradition and innovation, bitter and sweet, light and heavy, tasty and refined, good and... excellent!

What to expect from a typical Piemontese menu

If you feel ready to approach a typical Piemontese menu, here you are a list of must-to-try dishes, from starters to desserts.

Anyway, the Piemontese cuisine is so rich that the suggested one has to be considered just as an "entry level" food experience, to be followed by the search of more niche or super-local preparations.

Find out more at: www.piemonteagri.it/qualita/en/products/carni-fresche-e-preparazioni

Find out more at: www.piemonteagri.it/qualita/en/products/cheese

Anchovies: fishes swimming in the coutryside

Anchovies have a strong bond with Piemonte, being the queens of many Piemontese dishes, but how did them get to our hills from the sea?

No one really knows how them came to occupy such a prestigious position in the Piemontese cuisine and there are many legends, rather bizarre and confusing, that try to explain it. Nevertheless, at a certain point all of them end up with a common element: salt.

Going back to ancient times, these lands were crossed by the Salt Road, heading from the Ligurian Sea to the Alps. At that time, salt was a luxury item, very expensive and subject to heavy taxes and duties. In order to hide the precious cargo from the taxes collectors' eyes, salt merchants coming from Liguria creatively used to cover up their barrels of "white gold" with an abundant layer of anchovies, cheap and easy to find there. Thanks to the presence of salt, anchovies were also incidentally preserved during their trip. Layer by layer, they began to be more and more popular in Piemonte and, as salt prices went down, became the real protagonists of trades.

Anyway, what is true for sure is that in Piemonte there is a longlasting tradition of anchovy mongers (the so called "acciughai") and most gastronomes point at the "Valle Maira" as the place where the story began. Bicerin: a secret cup to boost your creativeness

Bicerin is an iconic hot drink of Torino, devised in the 18th century by the historical cafè "Caffè Al Bicerin" (located in Piazza della Consolata).

Since the beginning the recipe has been kept secret. Ingredients are simple (coffee, hot chocolate and cream), but the quantities to pour and mix are still unknown. The output is a tasty hot drink, perfect for the chill winter afternoons, mixing hot chocolate with the marked flavor of the coffee and a delicate cooled cream foam. It is served in glass goblets that allow you to see the nuance of colors of the different ingredients.

Great Bicerin fans were Alexandre Dumas, Pablo Picasso and Umberto Eco. Ernest Hemingway included this drink in the list of hundred things in the world he would have saved! 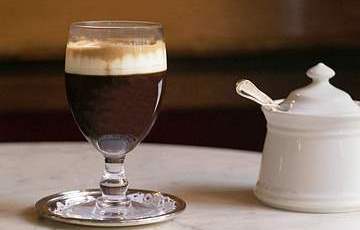 According to tradition, Antonio Brunero, baker of the Savoia royal family (kings and queens of the Kingdom of Piemonte and Sardinia first and of the Kingdom of Italy then), devised this product in 1679 upon the advice of the royal doctor to help baby Vittorio Amedeo II eating. As a matter of facts, the future king, of poor health, couldn't eat bread ("Ghersa" in Piemontese dialect), because of difficulties in digesting its crumbs.

Then the baker invented a type of bread without crumbs, calling it "Ghersin" (i.e. small "Ghersa" in Piemontese dialect) or "Grissino" (in Italian). Thanks to their high digestibility and ease of preservation (breadsticks could be kept much longer than bread) the success of this delicacy was almost immediate and became widespread in Piemonte and abroad.

King Carlo Felice is said to have loved them so much to munch them in large quantities, even during the plays on stage at the Teatro Regio (like we do today when we eat pop corns at the cinema!). Another famous "breadsticks-addicted" was Napoleon, who set up at the beginning of the 19th century a special transportation service to bring to his court in Paris what he called "les petits bâtons de Turin" (the small sticks of Torino). 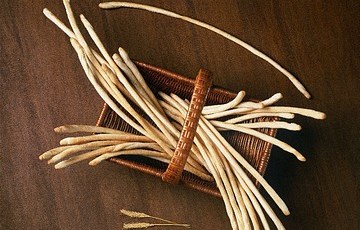 Gianduiotto: when less is more

According to tradition, the Gianduiotto was born during the continental blockade imposed by Napoleon against the British Fleet in 1806. As a consequence, cocoa became difficult to find, as well as particularly expensive.

Anyway, the demand for chocolate continued to increase, driving many Piemontese chocolatiers, such as Michele Prochet, to start producing chocolate by replacing part of the cocoa dough with hazelnuts paste, a typical and abundant product of our hills. This hazelnut, called "tonda e gentile" (round and refined), is well-known for its premium quality and has the PGI official recognitions, but at that time it helps in overwelming a market constraint, making the chocolate more accessible to everyone.

The Gianduiotto was literally "launched on the market" in 1865 on occasion of a carnival parade lead by "Gianduja", when the famous masked character of Torino (from which the sweet took its name), threw a bunch of small chocolates to the people attending the event.

Please find here under a list of the most important words you should know to order yourself a great Piemontese meal, together with their translation in Italian and English.

Nowadays the Piemontese dialect is rarely used to communicate in Torino, but if you plan to take a trip in the countryside or to visit our typical restaurants, it could be good to have them in your pocket... you'll never know!

Back to the homepage