An ideal blend of art, history, culture and landscape, Piemonte is a territory full of charm, offering countless places to visit and to explore.

Torino & Piemonte in the world

Piemonte region is located North-West of Italy, close to the borders with France and Switzerland.

On the banks of the Po river and surrounded by the Alps, Torino is the capital city of Piemonte region, fourth largest Italian city in terms of population and the third biggest economic and industrial hub after Milan and Rome.

The Milan Malpensa International Airport is just 100 km away from Torino, connected by bus and train to the city centre.

If you travel by train, the two main railway stations of the city ("Torino Porta Nuova" and "Torino Porta Susa") are part of the Italian High Speed Train Network, just 1 hour to Milan or 4 hours and 30 minutes to Rome (timetables and on-line ticketing available at Trenitalia and Italotreno). 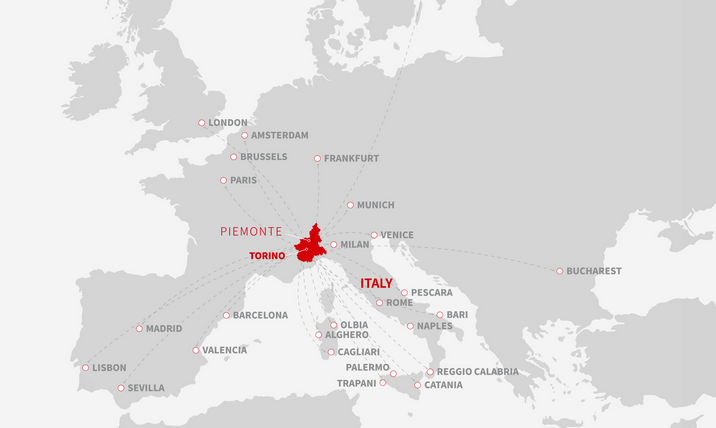 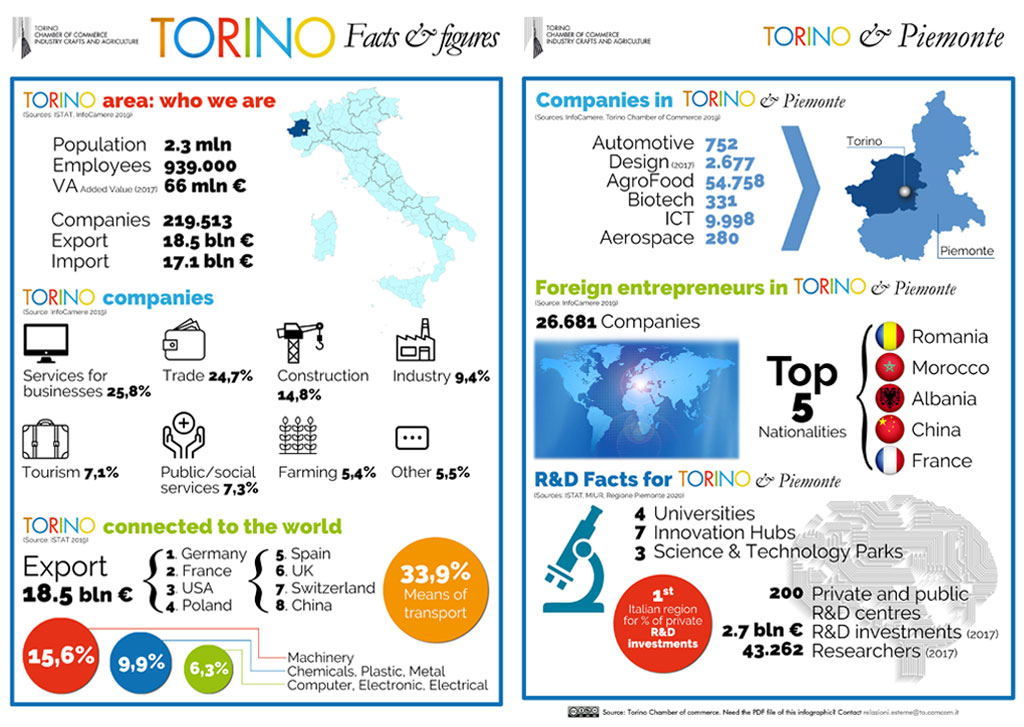 The first settlement in the Torino area has been founded in the 3rd century B.C. by a population of Celtic origin named "Taurini" (i.e. "people of the bull", from which is taken the symbol of the city: a rampant bull).

In 58 B.C. the settlement was turned in a military camp by Julius Caesar, due to its strategic position on the way to the Alps and to Gaul, expanding it as a colony in 44 B.C. and naming it "Iulia Taurinorum".

In 28 B.C. the Roman Emperor Ottaviano Augusto enlarged the colony and re-named the city "Augusta Taurinorum". It was surrounded by walls and its masterplan is still detectable today.

Starting from the 15th century the city became the headquarter of the House of Savoia, capital of the Savoy Duchy first, then of the Kingdom of Piemonte and Sardinia.

At that time, Italy was divided into a number of kingdoms, duchies, marquisates, etc., some of them ruled by foreign Houses such as the Habsburg in the North East or the Bourbons in the South, while in the center there was the Papal State.

Beating heart of the "Risorgimento", Torino became the first capital of the Kingdom of Italy from 1861 to 1865, as soon as the country was unified by the Savoy upon the impulse of a large and widespread indipendence movement.

In the 20th century, Torino became an important industry and technological hub, being home of important companies in the aerospace and automotive domains (Torino is where the FIAT was born).

In the same period, great local entrepreneurs put all their efforts and creativity in bringing agricultural productions to a further level, supporting and boosting the developent of the Italian food industry.

Small businesses and big companies like Lavazza, Ferrero and Martini brought three pillars of the Piemontese food production worldwide, defining important consumer trends: coffee, chocolate and vermouth... still today in every bar or restaurant of the world you can find at least one of these three products as a fingerprint.

At the same time, the area was birthplace of great writers, architects, designers and artists who enriched the Italian cultural heritage, writing unforgettable masterpieces, creating unmissable artworks and designing iconic buildings and products.

First capital city of Italy during the Kingdom of Italy, Torino is today a lively cultural hub, featuring a rich heritage of museums and monuments.

The Museo della Sacra Sindone (Museum of the Holy Shroud) provides you with a detailed overview of the scientific investigations started in the 16th century to tell the story of the Holy Shroud, preserved in the Cathedral of Torino.

The Museo Egizio (Egyptian Museum) is the oldest museum on earth devoted entirely to ancient Egyptian culture, second in the world after Cairo.

The Fondazione Torino Musei (Torino Museums Foundation) brings to you the most interesting cultural experiences connected with fine arts, with astonishing collections from classical to contemporary and Asian art.

The Museo Nazionale del Risorgimento Italiano (National Museum of the Italian Risorgimento) shows you the path to the unification of Italy, whitin the halls of the oldest and best-known museum of History of the Nation, hosted in the first Italian senate palace.

The Museo Nazionale del Cinema (National Cinema Museum), among the most important in the world for its rich heritage and the diversity of its scientific and educational activities, is housed in the Mole Antonelliana, the symbol of the city 167 meters high.

The Museo dell’Automobile (Car Museum) boasts one of the rarest and most interesting collections of its kind, with over 200 original cars of 80 brands from all over the world, revisiting the ongoing evolution of the car, symbol of the 20th century.

Back to the homepage